BioTalent Canada has announced the winner for its first ‘Catalyst’ Award, for the young employee who contributed most significantly to their Canadian biotechnology employer in the past year. CLICK HERE TO READ THE FULL STORY! See the story on CBC by clicking HERE! 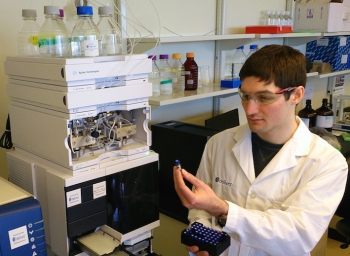 Mathieu-Marc Poulin of Delivra in Charlottetown, Prince Edward Island has been announced as the winner of the 2016 Catalyst Award.

Mr.  Poulin’s employer, Delivra, is a biotechnology company developer of transdermal technologies that introduce pharmaceutical and natural molecules into the body through the skin, rather than via pills.

“Importantly, BioTalent Canada’s wage subsidy program allowed us to mold a new graduate into a great fit within the research team and we’ve been impressed at how far Mathieu-Marc has come in such a short period of time,” says Dr. David C. Baranowski, Director of Research at Delivra.

“There is no doubt he’s an essential member of our research department and we look forward to translating his research into the marketplace.”